In response to the comment below, I have removed incorrect and potentially hurtful material regarding the tragically premature deaths of my high school buddy and intellectual sparring partner Menno Bachmann and his little brother Udo. Menno was a funny guy, whose signature comedy routine never failed to reduce me to tears of guilty laughter. In the manner of John Cleese (but a few years pre-Python), he would pace back and forth, hands clasped behind back, and begin “Welcome to Auschwitz….”, with an outrageous “German” accent, and then list the many guest amenities afforded by the Butlins from Hell. I can’t remember how it would end, but it’s sure to have been wittier than, say, “Und, of course, vee alvays cook mit gas”. Speaking of feeble wit, my mother and sister thought it was a helluva joke – original, too – to nickname him “Paws”.

I googled Menno and Udo, but the only result I got was their mother’s obituary. Naturally, as a snotty adolescent, I’d dismissed her at the time as just another wizened, nagging old bat. At that age, all one’s friends’ parents were Nazis, regardless of ethnicity.

I quote from the Winnipeg Free Press:

“Hilka worked very hard as an immigrant. She was an assistant librarian and a polio survivor. She helped students in the two libraries at the University of Manitoba [so, colleague of my dad!]. She had a love for opera music and sang beautifully.”

Even if she actually was a Nazi, she has just been instantly rehabilitated in my memory, and henceforth is a gorgeous and pure delight of a woman, and one I wish I’d got to know.

Oh, and on greeting our school’s two token bused-in-from-reservation boys, Delmar Cameron and Johnny Two Shirts, Menno would sing, to the tune of a Beatles’ ditty of the time, “Ojibwa, Ojibway. life goes on…”. They appeared to take it in good spirit, but then, Menno did die mysteriously while canoeing on an ancient lake…

The other day I saw the wonderfully named “Dead Hippie Sauce” on the menu of a designer burger joint, or nip joint for those of you who’ve never been out of Manitoba, and it put me in mind of the sublime “Triple O Sauce” invented by that legendary West Coast chain, White Spot.

For “Triple-O” sauce, it has been reported that, as the condiments used in the restaurants came in large containers, the excess dill pickle juice was swirled in the depleted mayonnaise jars, this mixture was then put into the depleted ketchup containers, then adding relish from the depleted relish containers, to which was added the juice and residue from the slicing of tomatoes, adding the resultant mixture to a commercial Thousand Island dressing.

may be apocryphal, but to me is actually entirely credible, given that during my brief career as a soda-jerk in an unnameable Winnipeg eatery I was taught how to do strawberry shortcake when we’d pretty much run out of, er, strawberries. It took me a whole cigarette to reconstruct one in my mind, but I’m pretty sure it went like this:

You sieved out anything solid still floating in  the juice/syrup at the bottom of the can, and formed a few small strawberry chunkettes from that, to which you added as much fresh strawberry and red gelatin as you could shave undetectably from the store-bought strawberry pies in the chiller, then slightly over-saturated the bottom half of the shortcake with the above-mentioned juice, went heavy on the aerosol whipped cream, and stuck a glace cherry on top. I never had one sent back, though of course we’re talking Canadians here.

The waitresses usually ignored my entreaties not to take any more orders for this item until more canned strawberries arrived. CeCe, my favourite, was more cooperative, though, and also had this wonderful turn of phrase when she had diners in a hurry: “Hey Bill – the sooner the possible, eh?”.

Apart from the sound of scraping fingernails or broken chalk upon it, the worst thing about the old-style school blackboard was having to watch the flapping flabby undersides of Mrs Kaye’s arms as she put up times-tables and spelling lists. In the fifties, our teachers liked to go sleeveless, and it was  never a good look, Mrs Whitworth and Miss Tinkler (yep) excepted. What was a good look back then was just about anything on wheels from Detroit-Windsor . Even the very old (so probably, er, 42?), thin-lipped, flabby-armed, hopelessly square Mrs Kaye motored about in one of these honeys, a 1957 Olds 88. 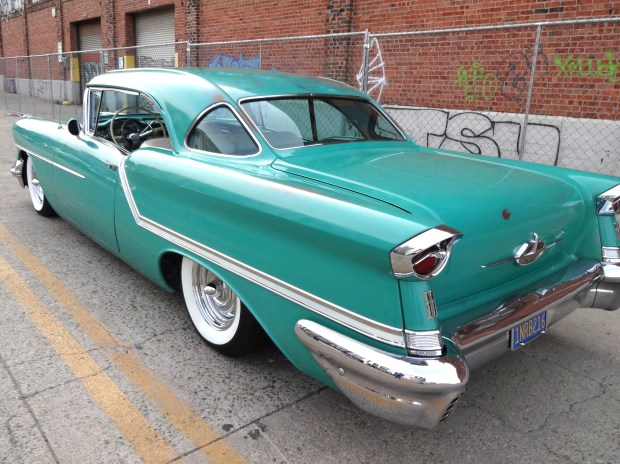 for her 25 mile drive in from the hamlet of Starbuck. Apart from Miss Tinkler, her pony-tail and her Ford, Starbuck was notable only for being around about where my Dad’s Vauxhall ran out of gas annually on our way home from a Saskatchewan summer holiday. 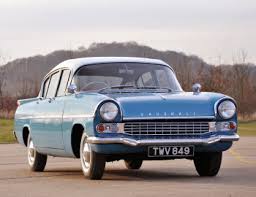 He insisted that with a light foot on the gas pedal and scant attention to the gearshift, that pile of British junk could make it home from Carlyle Lake on a single tank of gas. But for four years running, until he relented and bought American, albeit the most spartan, underpowered, single-carbed, chromeless, no-radio Chevy he could find, two or three miles either side of Starbuck was the limit. Never, of course, Starbuck itself. So big brother Cameron and I would push, Lord knows why, with our long-suffering mother at the wheel, while Daddy thumbed a ride to the Starbuck Texaco for a can of gas. After the switch to Chevy, there was no reason at all for Starbuck to exist, because Miss Tinkler had gone and married a city boy, and begun to go flabby in the arms.

2 Comments March 19, 2014 Bill
Somewhere between Ike Godsey’s General Mercantile and Amazon.com, retail history squeezed out a little space for corner groceries like Mr Schulz’s. For a man who clearly hated children, he kept a remarkably child-friendly store, with all sorts of  kid stuff you could buy for a nickel or less and grownup stuff for not much more, and all of it free of nutrition charts, health warnings, use-by dates and such. The array of penny candy (under glass, lock and key) went on forever, from the luxury all-day sucker for 5 cents to blackballs 4 for a penny. They tasted vile, but they did temporarily blacken all the teeth they hadn’t already broken from your jaw, so were a great buy. Mr Schulz sold fireworks all year round, to kids of any age, and he thoughtfully displayed them on a bottom shelf, just so he could bark at you for even thinking of theft. If you had a forged note from your mother, he would also sell you, with a bark, the matches you would need, and even cigarettes if they were a ladies’ brand like Matinee. He barked if you took too long choosing your 4 cents’ worth of candy, and he barked at you for not having the right change, not that any of us ever had folding stuff. If you dared to linger over goods for grownups, out you went, his bark following you down the road almost till you were home. His grandchildren probably adored him, but to us he was just a scary, wrinkled, bushy-eyebrowed white-haired monster who inhaled, in the worst possible humour, every penny we could earn or steal. Still, a dime pack of his firecrackers let off all at once inside a post-rigor mortis gopher would make an almighty mess, so I guess he was a little bit OK. The smell of gunpowder never fails to conjure him up, still barking.
2 Comments March 18, 2014 Bill

We were nine, and our 1961 longish-term substitute teacher, Miss Foxton, was a platinum blonde with red eyes. She breathed fire, but fire of such subarctic cold as to fast-freeze me and any other kid within range. She was probably beautiful in a Hitchcockian ice-maiden way. Kenny and I hated her guts because she would occasionally, just out of spite, make us sing O Canada a cappella in front of the class, and made great sport of measuring us to see who was that week’s shortest kid in the class.

So we went to see the Mayor, to suggest that he have her removed or at least severely disciplined. We were ushered into the office of an impressive-looking man in a suit. Of course my big brother told me later that this wasn’t the mayor, but a mid-level functionary, possibly a traffic engineer. Whoever he was, he listened politely for ten minutes, gave us each a dime for a Coke, and promised to do what he could about the Foxton problem. Good enough! We had our Cokes from Mr Schulz’s scary corner store next door, and then played chicken with the oncoming traffic, leaping at the very last second into the four foot snowdrift at the side of the road. Possibly Mr Mid-Level witnessed this from his office window, and phoned the school in horror. Or possibly not. But the fact remains that Miss Foxton disappeared just days later, and we were back in the loving embrace of the benign and divine Mrs Underhill. We didn’t behave suicidally for weeks!